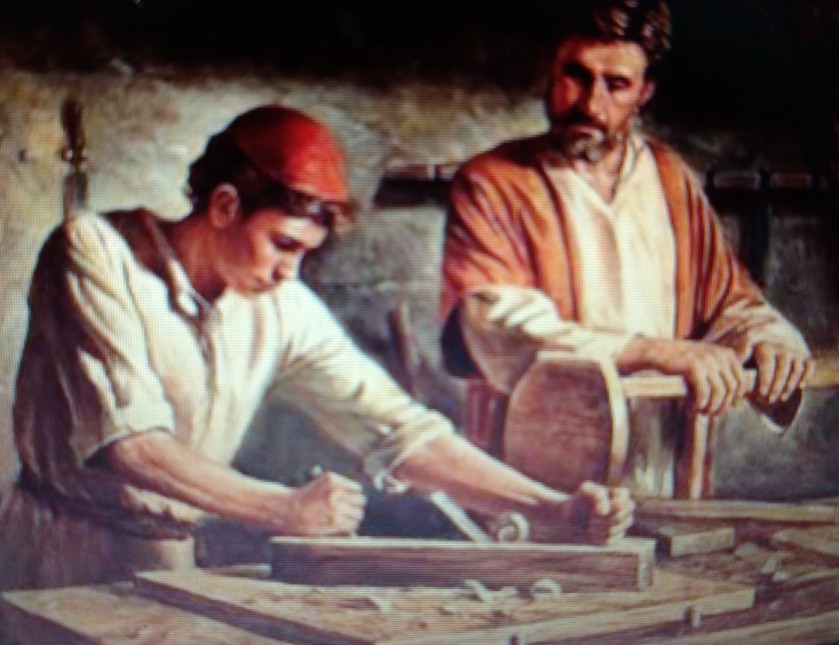 Probably the first Saint that i ever truly loved, long before i even knew about Francis, was the Saint that is celebrated throughout the world on March 19, JOSEPH!!! Oh, how beloved he is in every land!

The Quiet Man, the humble man. How many of his words do we know? Amazing, right!? But, in Silence he spoke so loudly about Strength…and Dignity…and Love…Joseph the Carpenter who taught his Son to respect, to revere, to love the Wood.

This week i was working for a man who owns some apartments. We’ve been fixing them up for new tenants. i came upon a big ole ancient nail, which everyone agreed is good-for-nothin’, everybody but me. To me it told the Story of St. Joseph!! 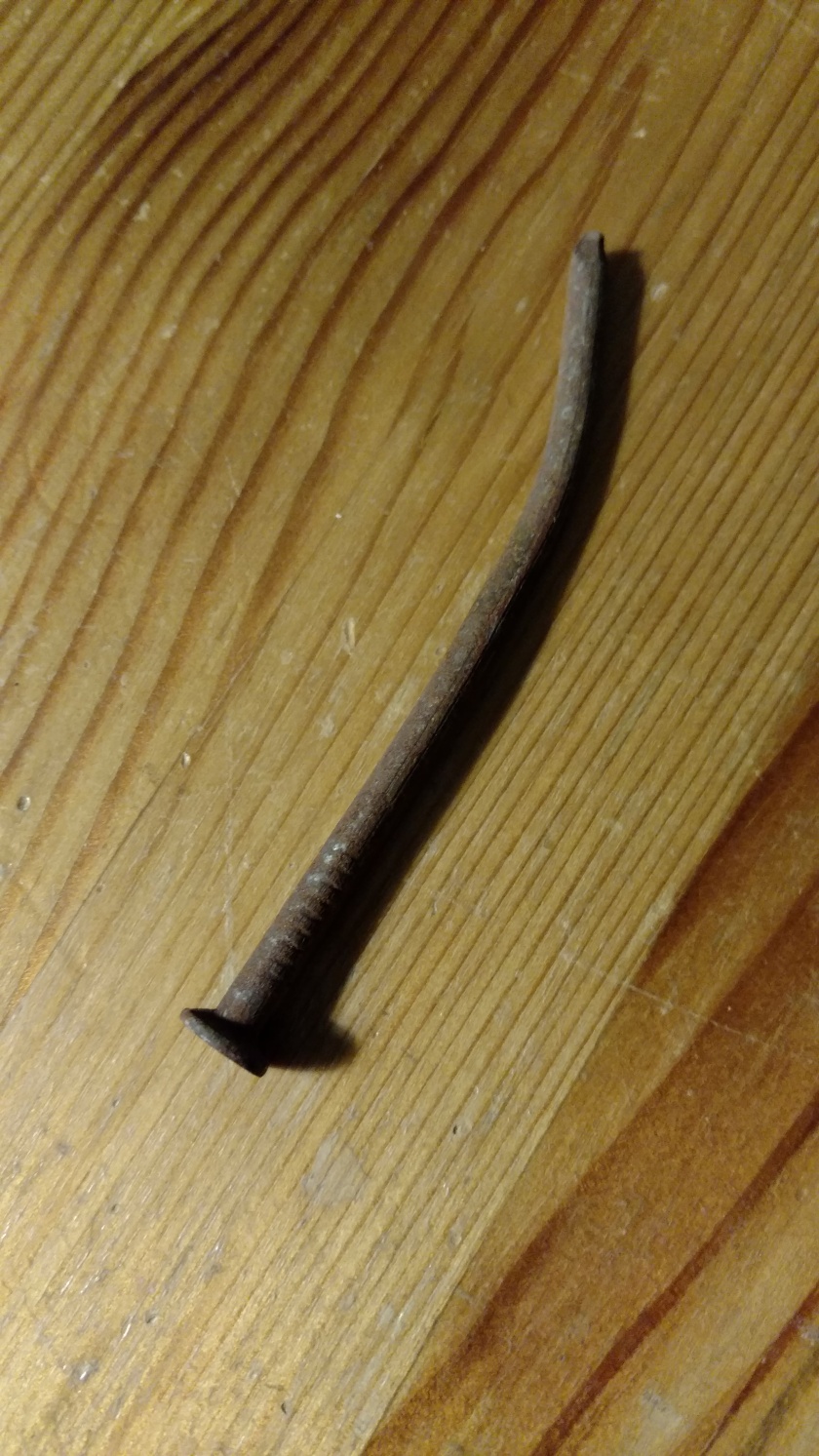 What good is a nail that’s rusty and bent and not even sharp anymore? To do its work, the nail must, most of all, be straight. i am sure that Joseph of Nazareth knew this quite well. But, while his Son, Jesus, was hanging on the Cross, mostly in excruciating Silence, and he looked down into the face of his Sweet Mother, i am certain that he thought back to his dear daddy, who taught him how to Love that Wood, to embrace that wood – BUT WHO, no doubt, TAUGHT HIM THAT LIFE WILL VERY OFTEN BREAK FROM THE RULE of carpentry! It will make no sense many times; it will demand a CRAZINESS, a LOVE that is stronger than the strongest nail, whose task can only be completed by the bending, bending just to the point of breaking.

i was born the same year that Art Clokey gave birth to Gumby. When i look back over my 62 years, i can find hardly a better example of “What It’s All About” than that little green guy. i still have mine

When St. Joseph was asked by God’s Angel to follow this plan and to be the father of Jesus, everything in Joseph’s mind, heart, and soul went against it. NO WAY, GOD!!! You are asking a straight nail to bend!!!! This is out of the question. This is insane! But he did it. And in his humble silence he spoke louder than most about TRUE LOVE. Life don’t follow the laws of the carpenter shop. The Greatest among us will be the BENDERS.

As much as i love my own dad, and as much as i regret that my children never got to meet or know  that wonderful man, who died so young, i am equally happy that my children did come to meet, to know, and to adore (“to know him was to love him”) one of my dearest friends and “brothers-thru-faith,” Father Bob Grix, Capuchin Friar. Oh, but they never knew him in his “dynamo days,” when he was so active, such an amazing preacher and director of Passion Plays, surrounded by mobs of kids who fell in love with Jesus because of Bobby’s Love for Him. Suddenly one Christmas this inspirational priest was struck down by a powerful stroke, which left him struggling to move and barely able to speak anymore, except a few choice, wonderful words or phrases. And this is how he lived for many, many years. And this was the Bobby Grix that became their life’s HERO and precious darling pal. We would go so often to visit him in the friary/nursing home, to eat with him, play games with him (which he usually won), and mostly to DRAW GREAT STRENGTH from his great WEAKNESS, great Light from his great Darkness. 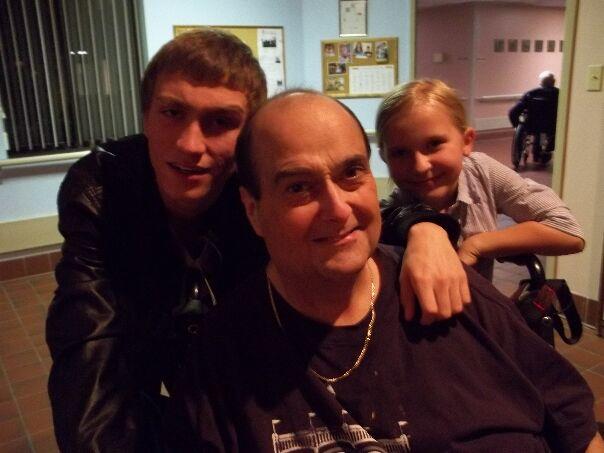 St. Francis was famous for saying to his Brothers, “Let us go into the world and preach the Good News of Jesus…” And they would follow him…sometimes through an entire city, where he would not say a word. (But people would be lit up by the light that shone from them, so he would later add, “And occasionally we will use words.”Ha ha! What a guy!) Father Bob didn’t need words anymore. Though yes, he did have a couple of doozies that SAID IT ALL, especially his favorites, OH WOW!! Oh how he savored life and friendship, music and food, faith and hope and love. We often say in Church that it all comes down to One Word, the most important word we’ve learned, that tiny word, AMEN. It simply means YES, to whatever happens, to whatever comes my way. i accept it, i’ll take it, i’ll go with it, i’ll learn to bend – like Joseph and Mary and Jesus and Bobby, if the Heavenly Dad so wills it!

As readers of this blog know, i am always referring to my trusty companion, Rudy the Beagle. And so, here again is why we love our dogs so much, like St. Joseph so quietly constant in their faithful love. The truest love needs no words. And this is seen never as much as it is in their later or last days, as is the case with our Rudy, so weak but so strong in the silence of love.