Today i was at a local gas station, simply putting some air into a tire, when i suddenly looked to my side and saw a large rock – SMILING AT ME! i am not joking. The cracks, the flaws, the faults in it had turned this rock into a happy rock.

At the very heart of solid Christian theology is this belief in the “Happy Fault.” Each year at the Church’s highest ceremony, at midnight of the Easter Vigil, a designated singer stands only in the light of the giant Easter Candle and sings the whole wonderful story once again. And in the heart of the song he swoons, “Ooooohhh, Happy Fault!,” referring to the great and wonderful CRACK in humanity, this tendency toward a “dark side,” as George Lucas likes to put it. The most commonly used word is “sin.” But have no fear, as the Great Song, the Exultet, declares, for that is the way in which we came to know LOVE HIMSELF in the One Who Came to Love the unlovable, the cracked, the flawed.

On this day, December 14, the Church celebrates the memory of St. John of the Cross, great Spanish Mystic. The Spanish have always been known for their fiery love, and this John was no exception. In fact, he might even be called “hottest of the red-hot lovers,” his poetry some of the most passionate that the world has ever known. Except, the Love he was interested in was that Fiery Love of God! He found the best imagery in the fires that warmed his cold, “dark nights of the soul” on his holy Spanish mountain. 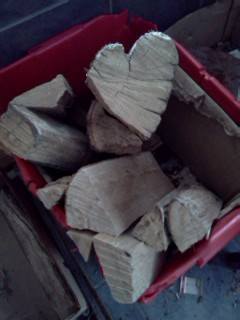 Years ago i came to settle on a mountain in New York called Mt. Beacon. It had come to be famous by a wise ole man who dwelt there. Besides being a grand-daddy of Folk Music, Pete Seeger was known to us mountain-people as the master-chopper, and in different conversations with Pete over the years he loved to share his secret. “Look for the flaws; every log has its faults.” Rumor on the mountain has it that that is what Mr. Seeger was doing when he died, just as he had predicted himself, chopping wood.

Pete would have loved Mystic John as a fellow connoisseur of a good fire. But for St. John a fire had the highest significance. It symbolized this Treasure beyond all treasures, this Perfect Love which longs to enter into each and every being, its nooks, its crannies, its cracks, its faults, and slowly devour it, make it One With Himself. It says many times in the Holy Books that God is not really interested in our fancy offerings or sacrifices. He longs for our weaknesses, our imperfections, our sins, which only we can surrender to God in acts of humility, of honesty. When i swing my ax, i focus on the weak spot. i thus have perfect customers for the Flame. And in the silence i can hear the Music of the Fire at work, breathing through those cracks, overtaking every dark corridor with its Light, just the way that God’s Spirit would have me.

i opened the door of my woodstove one day to find this site. As the great Canadian poet sang, "Ring the bells that still can ring. Forget your perfect offering. There is a crack in everything. It's how the Light gets in." - Leonard Cohen