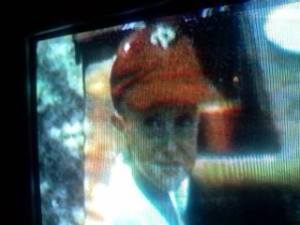 One of my favorite amazingly-true stories from my life, one which scanned half a century, i never tire of telling. i tell it again today for my darling sister, Judy, and the love of her life.

It was early November, 1959, and the sweet little boy in his Philadelphia Phillies cap was about to have his world turned upside-down. Though only 5 i was quite the charmer, working that face to lure many a “2 bits” out of weak pockets in order to buy new packs of Topps-plus-bubblegum. My baseball card collection was already as legendary as its stars.

Suddenly, however, the boy was swept up by a force he never saw coming. It traveled in by way of airwaves and the transistor radio. No, my Beatles were still a long way off. This was a local boy, just a teenager, from Philly, Frankie Avalon. i was smitten. i was overcome. And my life would never be the same from that day forward. It was the last Number One of the 50s and first Number One of the 60s, just a 2 1/2 minute tune called “Why.” Little did anyone know how it would become a “Song of Redemption.”

Passion got the better of me, got the whole of me, and i just had to have that record. There was an older kid two houses away, a fifteen year old Richard Roberts, who had a copy. Talk about charmers!!! He decided to cash in on my major life-shift into the world of pop music. Though he had no doubt picked up the 45 with two bits of his own (yep, $.25 were all they cost), he offered it to me, knowing full well my feeble legs, for my WHOLE shoebox of baseball cards. And so, so easily did i crumble. It was not long after the trade that this little fella realized he’d been bamboozled. The charmer had been outcharmed. And Frankie Avalon, Number One, or not, i wanted my cards back! But if Richard Roberts was anything in life, it was TOUGH. They never returned.

The charms of Dick Roberts would only grow and grow. Add a U.S.Navy uniform, and soon he added my sister, Judy, to his shoebox and other trophies. LOL, Just kidding, Jude! Everyone who knew this man would speak immediately of his steely demeanor, but they would just as immediately add that Life – and the Loves of his Life – would mold and mellow him into a real-life Superman, so to speak. Just as the finest beef is tenderized with steady poundings, so our Richard became known for his tenderness more than for his steel. Yes, the Soldier became the State Policeman and  Skier and Cyclist, who had already pedaled 50 miles before us normal people even lifted our heads off the pillow, but over time we also watched life and love work its most beautiful magic on him, molding him into “the perfect gentleman.”

The high school which i attended bore the name of St. Francis de Sales (different from the Assisian), and in the lobby there was a quote of his on the wall. Along with Jesus’ Golden Rule, it pretty much sums up everything that makes for “the perfect man:” “There is nothing stronger than gentleness and nothing more gentle than real strength.” In my life there was hardly a man who lived this better than Richard Roberts. All of my children came to idolize him, in whom were these qualities which i long for them to find and embrace as life’s surest treasure. And to all of Dick’s great accomplishments he added Master Photographer, so that he did not just CARPE DIEM, but he sealed those moments in memories forever.

At a very young age my dear brother-in-law was suddenly overtaken and subjected to the most brutal pounding of “Mr. Alzheimer,” and while in a very short time the monster reduced that mighty body to ruin, it never ever took his heart. He was the “perfect soldier” in life, as tough as steel yet as tender as that love that came to sweep me away in November ’59. Add to all of this that Dick, on his own, became fascinated with the Love of God and became a convert to the Catholic Faith. The charmer was eventually OUTCHARMED BY GOD, Who “never lets us go, why, because He loves us!” He is with us through all of the POUNDINGS that tenderize and make us great, HAVING SUFFERED THEM ALL HIMSELF!!! This is what Dick Roberts came to BELIEVE!

So, now here is the AMAZING PART OF THE STORY. Ten years ago today, on Nov. 3, 2005, my children and i were headed out for our regular grocery shopping. As i pulled into the parking lot at Walmart, all of a sudden Frankie Avalon comes over the car radio, singing “Why.” Oh, how long it had been since i ever heard it! And i just had to tell my kids the story of my first record and their “rotten Uncle Dick.” But, when we got home that night, i learned that it was at that very moment that my brother-in-law was going in and out of consciousness – before finally passing away. To this day tears fill my eyes, and chills go up my spine at the very thought of it, of Dick trying to say he was sorry.

i never tire of telling this tale. Why today? “Why, Because I Love You,” Richard Roberts! You know, some have estimated the value of my shoebox today at a million bucks, but its value is NOTHING compared to every moment i spent with you, especially as i watched your love for my children and theirs for you.  (“The Charmer” was also out-charmed  by my daughter, Molly!) 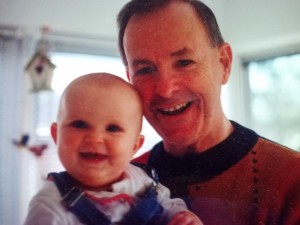 Dick, you had already made up infinitely for our silly trade. And now more than ever the song rings true, “We had found the perfect love, yours for me and mine for you…and I’ll never let you go… We’ll love each other true FOREVER!”