Though i can’t believe it has truly happened, today i officially became eligible for retirement! Where did the years go?! But, ya know what? i think i’ll take it.

My extremities loaded with arthritis, slowly creeping inward, recently diagnosed with my “piece of the pie” of cancer, and having taken more trips to the ER this year than in all 61 before it put together – trips because of fleeting breath, YES, i will take it, Uncle Sammy!

Don’t get me wrong. i do not think the end is near. Actually, overall i feel mighty good. But, boy! Now is when i need my P.F.Flyers! Back in the ’50s they made me “run faster and jump higher” than i thought possible – or so they said, and i believed them. And Belief probably made me REALLY do it! Belief can do the most wonderful things.

P.F.Flyers were the hottest shoes when i was a kid. Then, they faded in the competition…til they resurrected as New Balance. But in recent times we have seen the newest and Best P.F.Flyer of them all appear…in the Name of POPE FRANCIS! 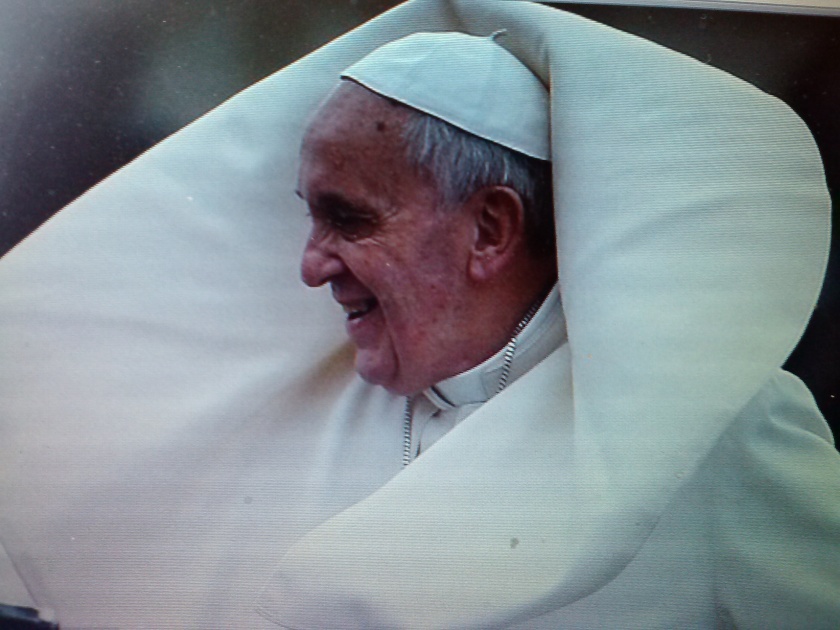 On Fire with the “Foolish Love” of God…Faster…Stronger…More Fearless than any before him…Flying out to the ends of the earth, no matter the threat, no matter the danger…with smile and laughter lighting his path through the darkness! Riding the Wind of the Spirit!

This week will be his toughest mission yet, tough enough – let no one be naive – that unless some flock of angels huddle around him and overhead, it could honestly be his last mission!!! But he is bound and determined as “the People’s Pope” to address that sad and severe suspicion of “religion” despite so many heinous acts done throughout history in its name. He will keep crying and calling out “NO! NO! NO! NO! NO!” That was NOT GOD! Nor was it GOD’s WILL! God is GOOD, and His Will is Love…then, now, and always.”

This is the great motivator of Pope Francis…what calls him right into the fires of Africa! Surely they will call him other “PF” names, like “Papa dei Folli,” Pope of Fools. To me he is the great return of the little bird in the PF i learned back when i was strutting in my Flyers, the Persian Fable of the bird who loved his forest, which had caught on fire. So much did he love her that he kept flying to a river nearby, and picking up droplets in his beak, he flew back and forth in his effort to quench the blaze which now swallowed mountains. An onlooking frog called the bird a crazy fool, but the bird, just before the fire took him, answered, “I love my forest. I have to try.”

So, this People’s Pope, even if it costs his own life, so loves the human race and so believes in its intrinsic goodness that he feels he has no other choice but to go. “Thy Will Be Done” is his “silly song and dance,” the “Dance of the Crazy Love.” This is True Religion and the P.F.Flyer whom i will follow wherever he roams…

4 thoughts on “TRUE RELIGION IN THE P.F.FLYER”